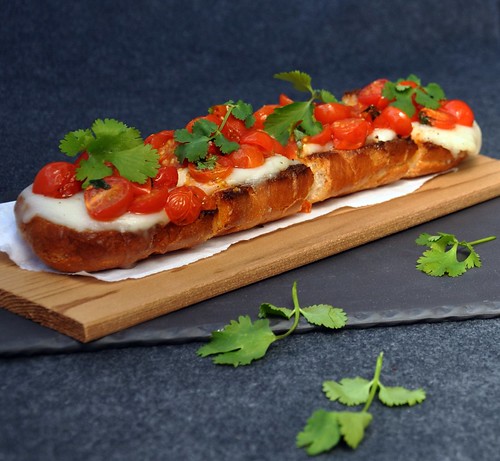 I made a really quick and easy organic roasted tomato bruschetta with fresh mozzarella recipe for lunch the other day.  It is only the first of April, but I have cherry tomatoes galore on the plants I bought for a story on container gardening.  The recipe I ran in the paper was a straight forward Italian take on bruschetta but, you know me, I decided to change to Southwest flavors when I made it at home.

My family likes things better when it has a little "kick."  So, I drizzled the tomatoes with guajillo  chile oil and traded the basil in for cilantro.  Monterey Jack cheese melts well and would be good with this recipe... oh!  so would jalapeno jack!  But I've been in a "use everything in the refrigerator" mood lately so, I stuck with the fresh mozzarella.  The tomatoes are already Southwest (the Italians got them from us) so I was safe there.

The guajillo chile oil is so easy to make, I usually have some in the fridge.  It adds more than just a slight heat to the bruschetta, it adds that distinct Southwest chile flavor. You can use what ever chile you have on hand (even red chile flakes) but, it won't taste as "Southwesty."  Guajillo chiles are one of the most common chiles used in Southwest cooking... enchilada sauce, chile Colorado, even tortilla soup.

I cut the loaves of french bread in half lengthwise and then into 2 inch wide piece after the bruschetta was finished so that it was a more substantial meal and not a thin little appetizer.

If you don't have chile oil on hand, go ahead and make it now (directions follow).  It only takes a few minutes to flavor the oil.  Like all things, the flavor will develop the longer the chiles are in the oil.  But, if you don't have much time, that's o.k.  The oil will have enough flavor for this recipe. 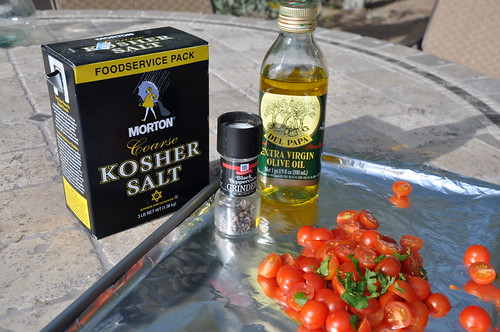 Wash and drain the cherry tomatoes.  Cut them in half, remove the stems and place on a foil covered baking dish (easy clean up).  Drizzle the cherry tomatoes with olive oil.  You can use the guajillo chile oil if you'd like but, watch out for the heat.  I used the chile oil for this step and plain oil for the bread.

Season generously with kosher salt and fresh cracked black pepper.  White pepper is nice if you have a thing about little black dots on your tomatoes. 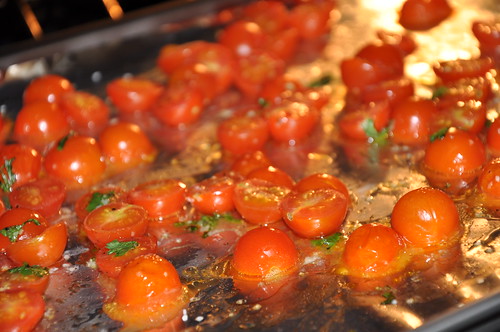 Roast the tomatoes in 400° oven.  Watch them closely... you don't want to over cook them.  Remove the tomatoes from the oven the second you see a few look wrinkly and the seeds start to get juicy.

My motto is: If in doubt, take them out. You can always sneak them back in the oven. 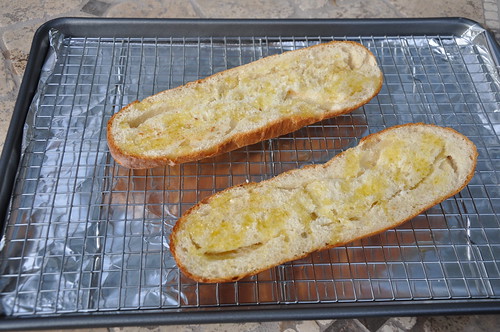 Cut the french bread in half  lengthwise, down the center and drizzle with regular oil or guajilla chile oil.  Season with salt.

Place bread on a rack or foil lined baking sheet.  Toast in the oven until the tops are golden brown. 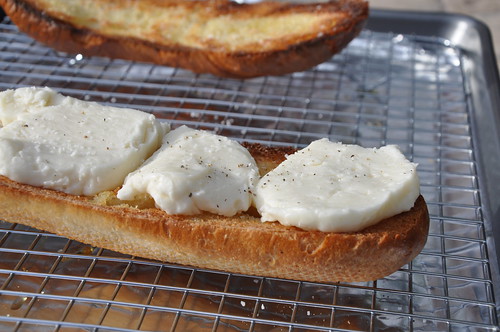 Remove from oven and rub a garlic clove over the toasted bread.

Place slices of fresh mozzarella on toasted bread.  Season with salt and pepper and return to the oven until the cheese is melted. 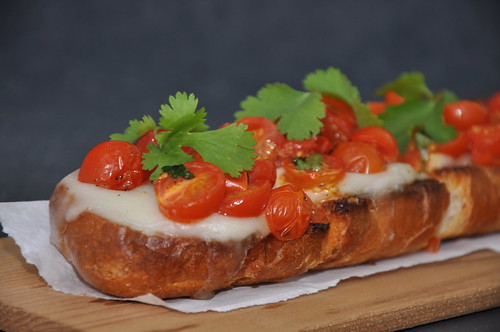 Spoon tomato mixture over the bread and cheese.

4- 5 garlic cloves, pealed and mince 3 of them (optional)

Remove stems and most of the seeds from the chiles.  Roughly chop the chiles and put in a small sauce pan.  Cover the chiles with oil and place over medium heat. Raise the temperature of the oil to just below the boiling point, around 180 to 190 degrees.  Remove from heat and let the chiles sit in the oil for about 5 to 10 min.  The longer they are in the oil, the hotter the oil will be.  Strain.

Preheat oven to 400°. Wash the cherry tomatoes, remove stems, cut in half and place in a large bowl. Lightly drizzle chile oil over the tomatoes.  Add garlic and toss.  Spread tomatoes on a large baking sheet. Season well with salt and pepper.  Sprinkle with sherry vinegar.

Roast the tomatoes just until the skins on some of them begin to split and the tomatoes are heated through.  Do not over cook them or they will get mushy.

Transfer to a platter to stop the cooking,

Slice the French bread or baguette in half lengthwise. Drizzle with chile oil or regular olive oil and season with salt.

Toast in oven until lightly brown.  Remove from oven.  Rub warm toast with garlic cloves to give it a hint of garlic.  Place slices of mozzarella on the bread and return to the oven until melted.

Spoon tomato mixture on top of the toasted bread slices.

Cut the bruschetta into 2 to 3 inch wide pieces. 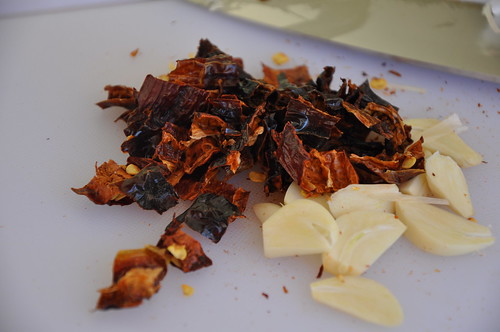 Remove the stems and as much of the seeds as you wish.  The seeds have most of the heat, so I removed most of my seeds. 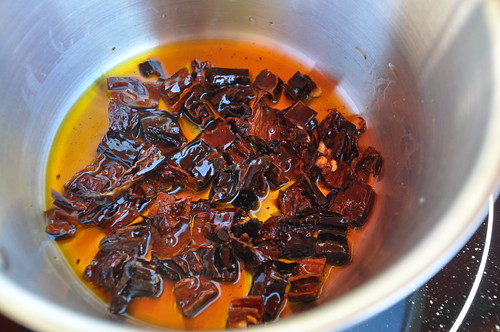 Pour the cold oil into a sauce pan and add the chopped chiles.  Bring up the temperature of the oil until it is just barely simmers.  Remove from heat and add the garlic slices.  Let the oil stand until cooled.  Strain.

3 cloves of garlic, peeled and sliced

Remove stems and most of the seeds from the chiles.  Roughly chop the chiles and put in a small sauce pan.  Cover the chiles with oil and place over medium heat. Raise the temperature of the oil to just below the boiling point, around 180 to 190 degrees.

Remove from heat and add garlic slices.  Let the chiles sit in the oil for about 5 to 10 min.  The longer they are in the oil, the hotter the oil will be.  Strain.