Our family recipe makes the Best Mexican Tamales Recipe ever! Here are step by step photos and a beautiful video to show you my special tips for making Mom's light, flavorful masa and tender meat filling so you make her delicious tamales recipe at home.

One of the best things about Mom's tamales is the masa. It is light and fluffy and full of corn flavor. The filling is a mixture of beef and pork that is cooked until tender then, stirred into a delicious red chile sauce.

Mom puts a black olive in the center of the red chile meat before rolling the tamale up in it's corn husk for steaming. The olive is a signature of a tamales recipe from the Old Southwest.

It is not hard to make tamales at home but, they do take some time. So, making tamales is the perfect time to gather family and friends around the table for a day of fun and friendship.

In the Southwest, tamale making at Christmas time is a treasured tradition. Families gather together and spend the day rolling tamales together. My mother, my sister and I  have made dozens and dozens of tamales together over the years and look forward to making a big batch anytime we can.

To us, making this tamales recipe is an art form.  We have shared step by step pictures of Mom's (AKA Carol Hicks) technique for mixing the masa and rolling the tamales so that you will get a tamale that is just as light and beautiful as Mom's. 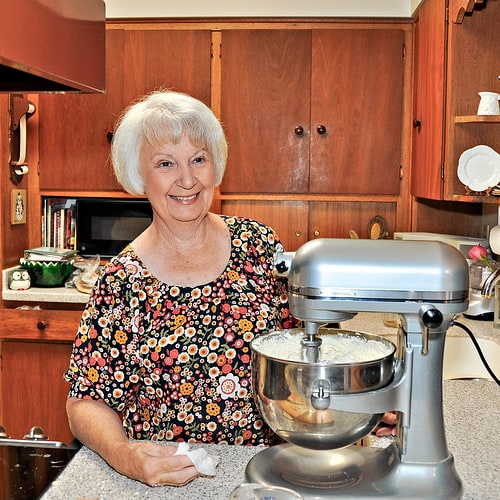 Cook the beef and pork mixture the day before preparing the masa and rolling the tamales. Refrigerate the meat mixture overnight in a large bowl so that the fat will rise to the top and solidify. Remove the fat from the top of the meat before mixing into the red chile sauce. 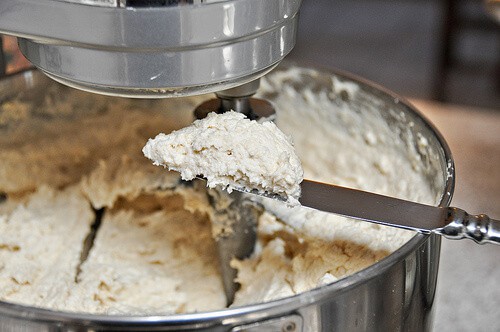 The masa should be light and fluffy like buttercream frosting when you are finished. You can tell the masa is ready when a teaspoon full of masa floats to the top of glass of cold water.

Remember to soak the corn husks submerged in water overnight before you start so that they will be soft and supple  when you roll the tamales.  Give the corn husk a little "stretch" before you spread in the masa.  Be careful not to tear the corn husk.  You can over lap smaller husks together before spreading on the masa which will "glue them together.  Spread the masa on the corn husk about a ¼ inch thick.  Leave a one inch margin around the top and the side edges with about 2 inches of margin on the bottom edge.

The meat for the filling should also be made the day ahead so that it can be refrigerated over night.  Chilling the meat over  night will allow more of the fat to rise to the top and be easily removed from the mixture.  Too much fat in the meat will discolor the masa and change the texture of the tamale.  Spoon the meat filling down the center of the tamale placing an olive in the very center. 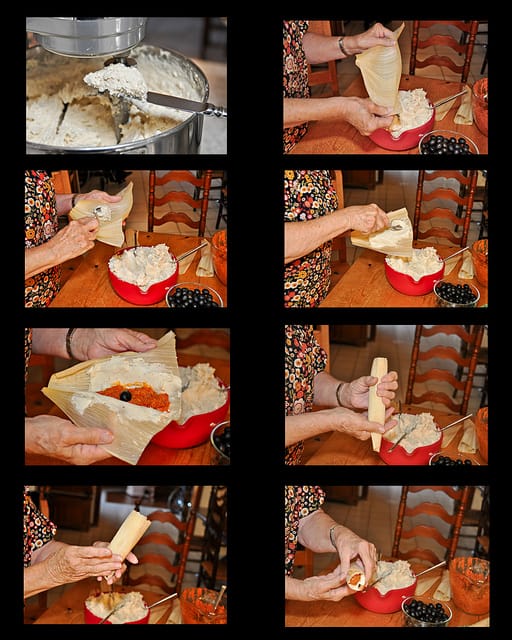 Carefully fold the corn husk around the tamale making sure the masa completely incloses the meat on the bottom and sides of the tamales.  The perfect homemade tamales leave the tops open and the filling slightly showing from the top.

Gently ease the tamale into a beautiful, round cylinder.  You may tie the tamale around the center with a strip of corn husk for decorative purposes and to securely close the corn husk but, as you get used to rolling the tamales, they will hold their own shape without the tie.  Fold the bottom of the corn husk up so that the tamale is enclosed and protected from the steam while cooking.

Try not to stack too may tamales on top of each other until they have been frozen or steamed.  The weight of additional tamales will not only misshape them but, also create the dense masa you are trying to avoid. 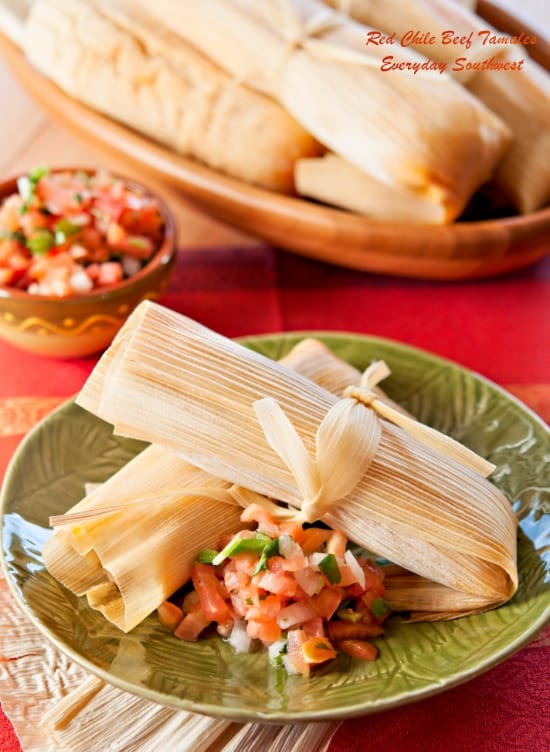 Shop this affiliate link to help you find everything you will need to make this tamales recipe.

Print
These are the tamales we grew up on. Mom has made several adaptions from the original recipe including the mixture of both pork and beef. The tamales are light and fluffy with only a tiny bit of heat. The olive in the center of the tamale is a must for us and is traditional to Arizona-Sonoran Cuisine.
Author: Carol Hicks adapted from Elena's Secrets of Mexican Cooking, Prentice-Hall 1958
Recipe type: Main Dish
Cuisine: Mexican
Ingredients
Instructions
Wordpress Recipe Plugin by EasyRecipe
3.5.3251
3.1.09

We know you will love these tamales as much as we do. They are the perfect tamale so... why waste time with any other?

Let us know how you like them, we love hearing from you. Be sure to check out our Facebook fan page this week, I will be posting the ingredient lists for the rest of this week's Mayan inspired recipe so that you can shop ahead of time and be ready on the big day!