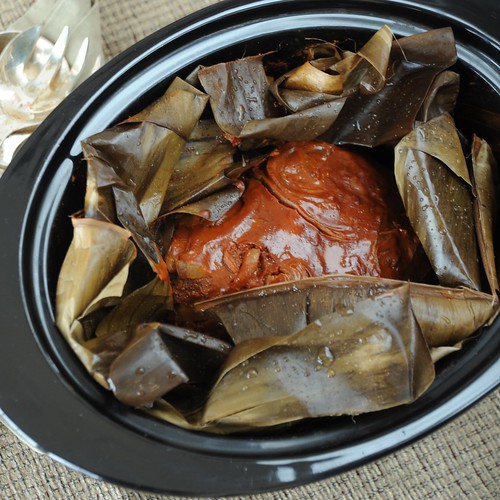 I am guessing that pulled pork is one of those dishes, like spaghetti sauce, that varies from family to family. So many great versions out there!

Puerto Ricans call it Pork Pernil. Each state in America's South has its own version. But "pulled pork" is actually an ancient dish from the Aztecs. I decided to go to the ultimate authority on foods south of our border, Rick Bayless. Let me just start by saying that Rick Bayless is a genius.

Seriously, he is a brilliant Rock Star Top Chef, but at the same time creates recipes that are home-cook friendly. Exhibit A: his Achiote Pork, more complete name: Achiote Cochinita Pibil, or slow cooked pork in a pit. This is made with achiote (annato seeds) paste and onions. Oh, yes, and a huge pork roast. All wrapped up in banana leaves.

So, the original ancient recipe calls for digging a pit (kind of like luau pork) and letting it roast all day. But. Top Chef Bayless, genius that he is, created a slow-cooker version. Genius, I tell you. I decided to go with Top Chef Bayless' version because that is obviously easier. Also, my husband would have divorced me if I suggested digging up the back yard.

We made this for our weekly Sunday dinner and I had people gobbling up every single morsel and a few asked if they could lick their plates. Yes, it's that good.

You will have to go to a Latino specialty store - but it will be well worth the trip! You need banana leaves  (I bought a frozen package) and achiote paste (which has a mild rich chile flavor). Then, just get yourself a huge pork roast and let the fun begin!

And, oh yes, the verdict: Tex Mex has nothing on the Aztecs - This pork was beyond delicious!

Mix the achiote paste with a fork in a small bowl with the lime juice and salt. Lay the banana leaves to line a large slow cooker. Rough chop the onion and spread in the bottom of the slow cooker on top of the banana leaves. Rub the achiote mixture all over the pork roast and then place in slow cooker with the lid on. Cook for about 6 hours on high, until pork pulls apart easily with a fork. Take lid off and then cook another 2 to 3 hours, so liquid evaporates. Remove roast and place on a platter. let rest for 15 minutes. Drain juices into a small saucepan. Simmer until reduced. Separate pork into chunks with a fork. Stir onions into pork. Taste and add salt as desired. Drizzle with reduced sauce. Serve warm.

So many pulled pork recipes to choose from! Pulled Pork by other food bloggers: