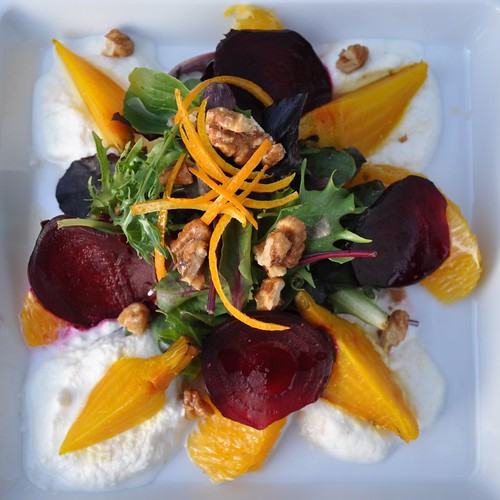 I've been craving beets. Can you believe it? Beets.  Not chocolate cake or cookies or banana cream pie... beets. I had a terrific roasted beet and citrus salad at Tyler Florence's restaurant, Wayfare Tavern, when I was in San Francisco at Christmas time and have been craving them ever since.

Do you remember those canned beets we grew up on?  The bright, pinkish-maroon kind that glowed in the dark in a sort of radio active way and tasted like the tin can they came in? Well, these are... not those beets. These beets are fresh and subtle tasting. Don't get me wrong, I like the canned beets, too. But, usually as a garnish, not the main event.

I've wanted make the Wayfare Tavern salad at home but, unfortunately, I didn't get a prep chef for Christmas. I must say that you need a prep chef, or two, to make Tyler's beet salad. It had several kinds of roasted beets, grapefruit supremes and a couple of springs of beet greens. Sounds quick and easy, right? Right. Except... he wasn't quite finished.

Tyler added some homemade ricotta and a walnut pavlova. Have you ever heard of a walnut pavlova? Me either. But it was delicious with the beets. The pavlova was just what you think a pavlova would be only very thin and broken into small bite sized pieces. It lightened the walnut's flavor to keep it from dominating the salad and added a touch of sweetness. Yum.

I decided to try and duplicate the flavors of the Wayfare Tavern's beet salad last night... minus the prep chef, of coarse.  So, to save a few hours work, I traded the pavlova for blanched, then lightly sugared walnuts and, don't tell Tyler about this, I used a good quality store bought ricotta that I thinned with a little milk and whirled in the food processor. The processor is to make it less grainy, but it is SO not necessary.  Next time, I'll save a few dishes and skip that step.

Tyler's salad was a first course.  I wanted to make mine big enough for a main dish. So, I added mixed greens, sweetened orange zest and more of everything.  More beets, more citrus, more walnuts, etc...  I left mine meatless but, you can add a grilled chicken breast or scoop of chicken salad if you like.  You may also change out the ricotta for another cheese.

How to roast beets: 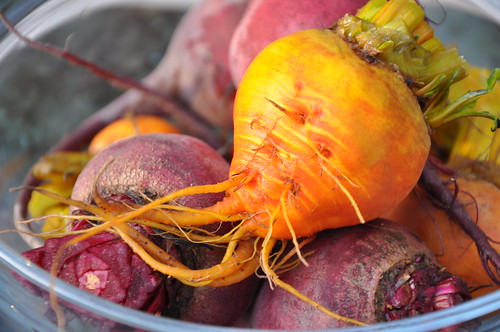 First, wash and scrub the beets with a potato brush. Then, trim them up a little. I like to keep them looking like beets, but I do trim around the stem and any of the roots that have gotten carried away. 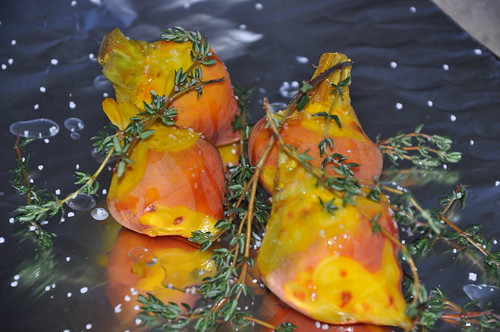 Spread out a piece of aluminum foil.  Place the beets on the foil.  Drizzle with a little oil and sprinkle with salt and pepper.  Add a few sprigs of thyme. 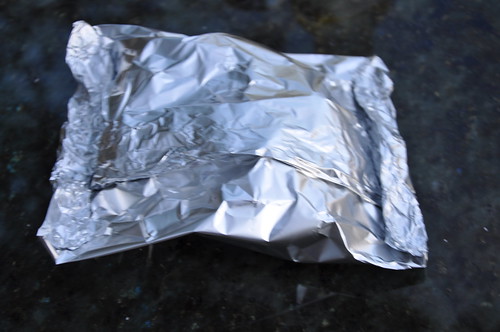 Fold the foil up like an envelope. Roast in a preheated 400 degree oven for about 40-45 minutes.
Tip: Do not over cook the beets! Every recipe I found said to cook them for 50 min to an hour. That is way too long. The beets steam themselves and get mushy.   A knife should pierce the beets but they should still have a little "bite" to them.  Remember, they will continue to cook after they are removed from the oven.  Start checking the beets at 30 min, if they are small.  You may pierce the beets through the foil. 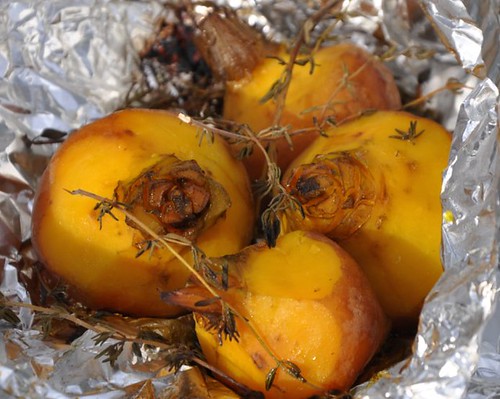 Remove the beets from the oven and open the packet immediately so they will cool down faster and stop the cooking process. 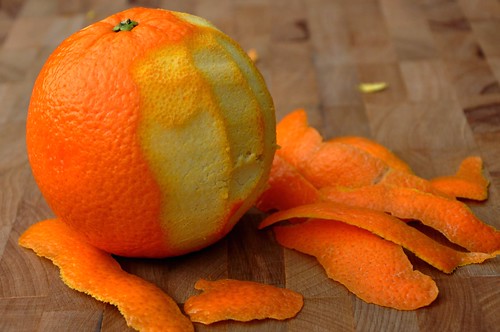 With a sharp paring knife, carefully remove only the orange part of the orange zest.  The less white pith on your zest, the better. 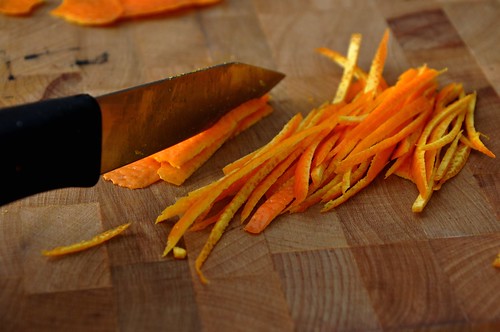 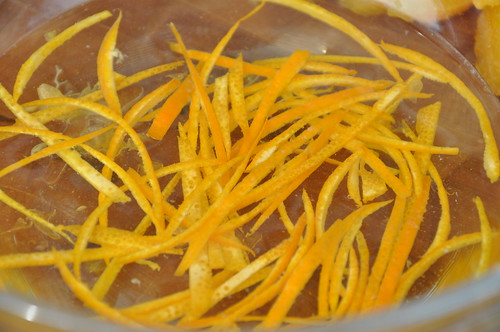 Tip:  This is a tip from one of my mentors, Chef Mark Tarbell (you may know Chef Tarbell from his victory over Iron Chef Cat Cora in Battle Apple).  You don't need to actually candy the orange zest and go through all the boiling and draining and boiling again in simple sugar.  If you have cut only the orange part of the zest, just toss the julienne strips into a cup of very hot water with 2 to 3 handfuls of sugar.  Swirl the sugar in the hot water until dissolved then add the orange zest.  Let the mixture sit for a few minutes then remove.  They are ready and have a very orangey taste without being too sweet like a candy or dessert. 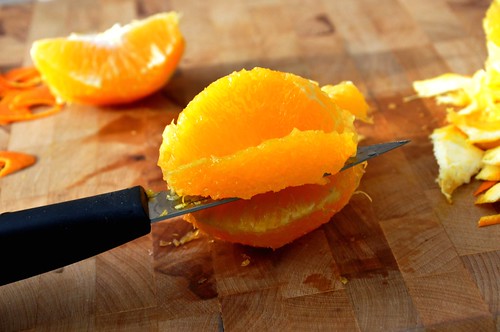 Cut the rest of the peel off the oranges and separate into supremes.  Set aside. 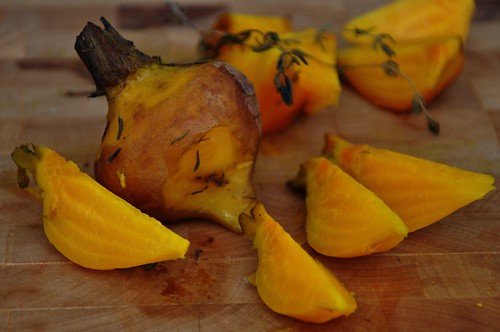 Peel the beets and cut some of the beets into wedges. 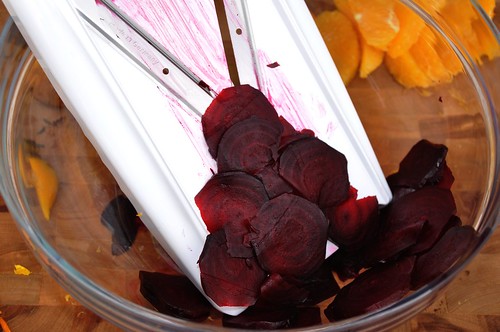 Cut the other beets into very thin, round slices. 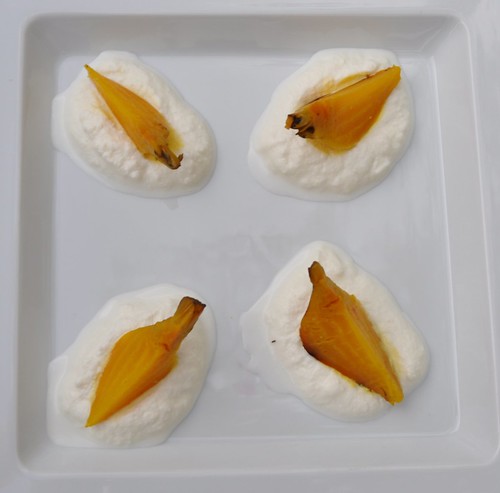 Plate your salad by starting with a dollup of ricotta in the corners of your plate. Top the ricotta with a wedge of beet.  Place an orange supreme between each of the beets.  Lean one of the round beet slices against each of the orange slices.  Toss remaining orange supremes with the mixed greens and vinaigrette.  Add orange zest and a walnuts.

If you have leftover beets, dice them and toss them into your salad.  I saved my leftovers for another dish. 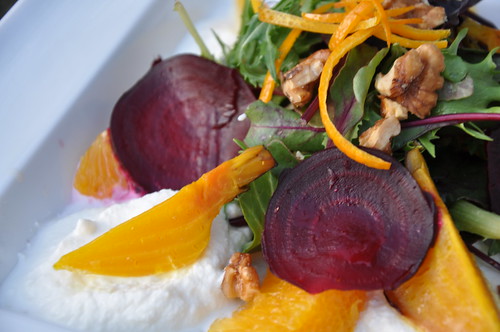 Organic Roasted Beet and Citrus Salad with Walnuts and Ricotta

3 oranges, zest into long strips and cut into supremes

2 to 3 handfuls of sugar

salt and pepper to taste

Preheat the oven to 400°.  Tear a 24 inch piece of aluminum foil.  Put the beets in the center of the foil.  Drizzle with olive oil and sprinkle with thyme, salt and pepper.  Fold the foil over the beets and crimp the edges several times to seal the pouch.  Put the pouch in the oven and roast for about 40 to 45 minutes.  You can stick a knife through the foil to test the beets.  The beets are done when the knife goes into the beet smoothly, but the beets still have a "bite" to them.  Take the pouch out of the oven, open it up to let the beets cool, then peel and cut some of the beets into wedges and some into very thin slices.

Do not over cook the beets! Remember, they will continue to cook after they are removed from the oven.

While the beets are roasting:

Blanch walnuts in  boiling water, about 3 minutes.  Drain.  Toss walnuts in sugar and toast in skillet for a few minutes, until sugar melts and coats the walnuts.

With a paring knife, cut strips of orange zest off the oranges.  Be careful to only cut the orange part and not the white pith.  Cut the slices into julienne strips.

Dissolve the 2 to 3 handfuls of sugar in a cup of very hot water.  Add orange zest and soak until soft and pliable, 3 to 4 minutes.

This step is optional.  Put ricotta into a food processor and a whirl.  Drizzle in enough milk to make the ricotta creamy and thinned just a little, if needed.

Dress lightly with balsamic dressing and spritz with fresh lemon and orange juice.

Place salad in the center of each plate.

Salt and pepper to taste.