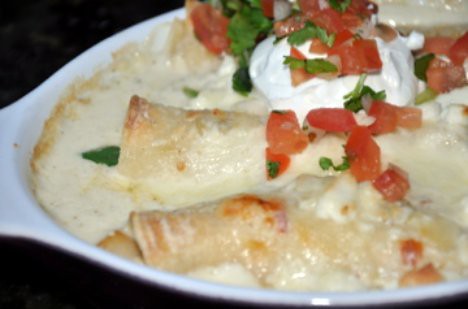 Shrimp and scallops are the perfect way to dress up an enchilada recipe.  Everyone should know by now how much I love enchiladas.  But, let's face it, enchiladas don't usually attend black tie dinners.   Not unless they are stuffed with seafood, that is.  I needed a fancy recipe for a birthday get together and Enchiladas del Mar (enchiladas of the sea) where just the thing.

My Enchiladas del Mar are inspired by a class I was lucky enough to attend that was taught by one of Phoenix's top chefs and James Beard Award Nominee 2010, Silvana Salcido Esparza. You may have seen her judge a Huevos Rancheros competition on a recent episode of Bobby Flay's Throwdown.  It's about time the Food Network recognized her!  Chef Esparza's fantastic food has lured diners from Phoenix and the entire country to her neighborhood restaurant, The Barrio Cafe, for years.  The Barrio is a great little restaurant that serves authentic southern Mexican food from Oaxaca, Vera Cruz and the Yucatan.  You have got to try her Cochinita Pibil, it is better than the dish by Rick Bayless.  I know! I've tried them both!  I love Rick Bayless. I'm just keepin' it real. 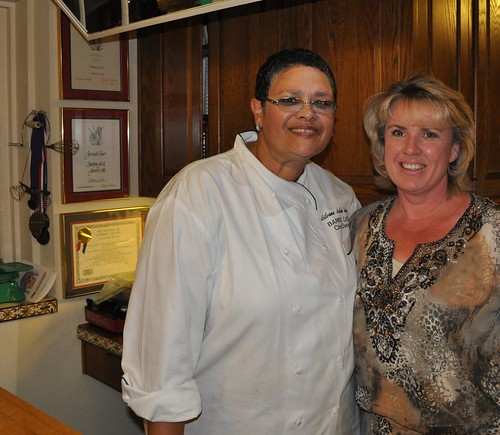 The Barrio Cafe's seafood enchiladas are filled with a rich mixture of imported Oaxacan cheese and goat cheese.  They are topped with beautiful shrimp, scallops and crab smothered in a white wine and tomatillo cream sauce.  Very delicious!

My enchiladas are not quite that fancy, but very easy to make for a special dinner at home.  I used ground shrimp left over from testing a burger recipe, not too pretty, so  I mixed in some scallops and hid them inside the corn tortillas.  There are other differences as well.  I left out the imported cheese in favor of a few goat cheese crumbles and used sour cream to thicken  the sauce and replace the tanginess of the missing cheese.  I did use Chef Esparza's technique of cooking the shallots and deglazing with white wine and adding tomatillos to the cream sauce. 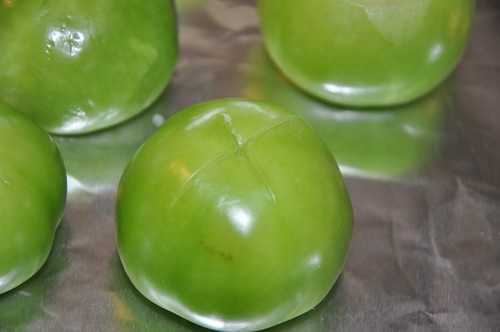 First, get the tomatillos roasting.  An open flame is great when you have one... I used a 400 degree oven. 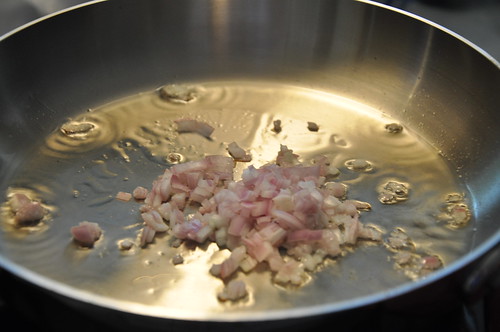 Next, saute the shallot and garlic in a little olive oil. 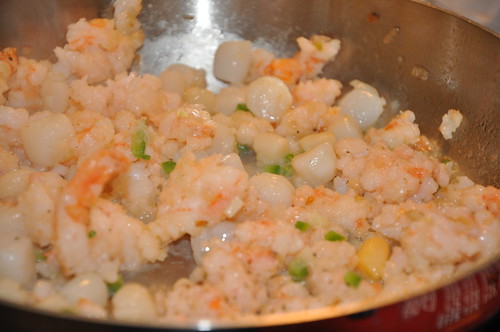 Add the jalapeno, let cook for minute or two.  Add the shrimp and scallops.  Saute until not quite done.  Remember, they will continue to cook in the pan and in the enchiladas. 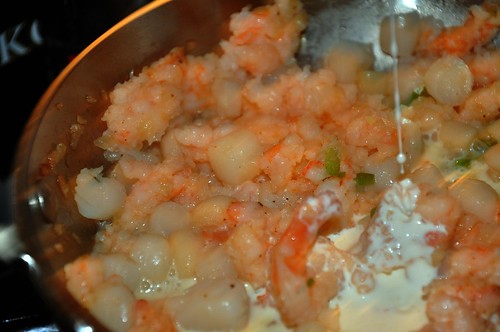 Add a little cream to keep them moist.  Remove from heat and remove from the hot pan to stop the cooking.  Season with salt and pepper. 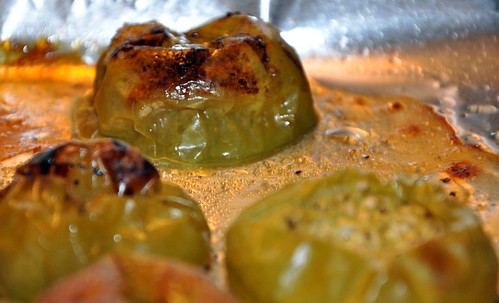 Peel the tomatillos and puree them in a blender or food processor. 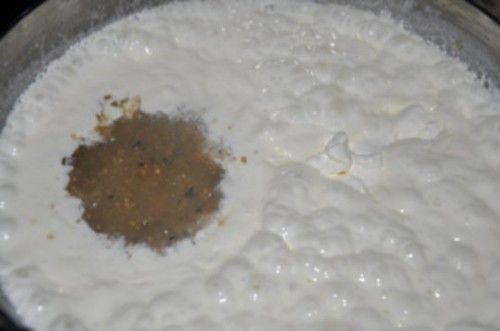 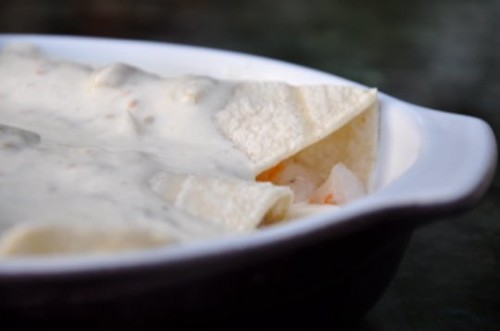 Fill corn tortillas with shrimp and scallop mixture.  Roll up the tortillas and line them up in a large casserole  dish or small individual dishes.  Gently pour the tomatillo cream sauce over the enchiladas.  Leave a little tortilla uncovered so that the ends get crispy (my favorite part). 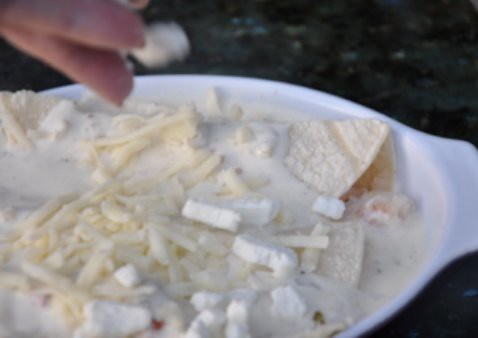 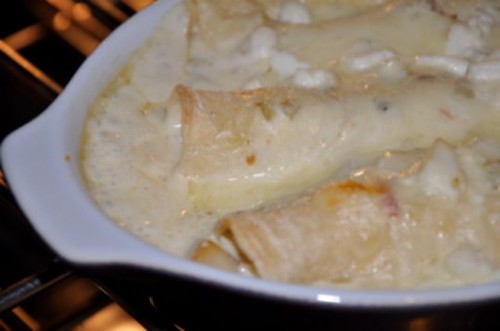 Bake at 400 degrees until the enchiladas begin to brown and the sauce bubbles around the edges.  Don't over cook.

salt and pepper to taste

Saute shallots, garlic and jalapeno in olive oil until soft, but not brown, about 1 minute. Add chopped shrimp and scallops until shrimp are slightly pink.  Add white wine and simmer until  wine is almost evaporated.  Pour in cream to moisten the filling and remove from heat.  Transfer the mixture to a bowl to stop the cooking.

Spoon onto corn tortillas and roll into cigar shape.  Line them up in a large baking dish or small individual dishes.

salt and white pepper to taste

Roast tomatillos in a 400 degree ove until the skins split, but not too brown.  Remove from oven and cool.  Puree in a food processor or blender.

Bake at 400 degrees until sauce is bubbly around the edges and tortillas are golden brown.  About 15 minutes.  Do not over cook.

Here are some other enchilada recipes  that look terrific.  I could stare at the photos all day!