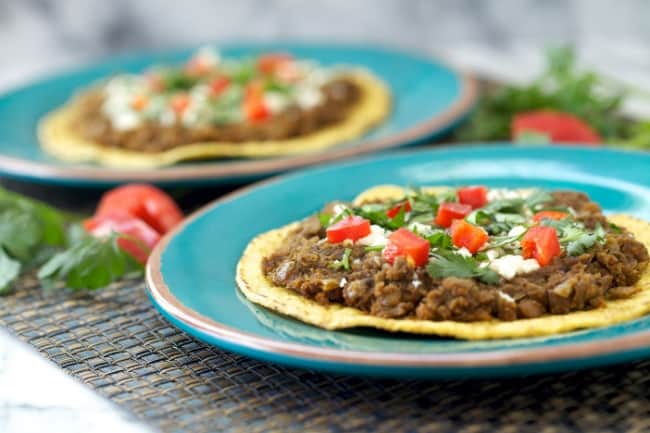 Who says only beans get to be refried?

Refried lentils is the result of a Desperation Dinner one night when I was craving tostadas and had no beans in the pantry. I thought, why NOT lentils?

Lentils are much easier to use than beans - no overnight soaking, draining, planning ahead. Lentils can be cooked up in just minutes, and are earthy and delicious. And not as starchy as beans.

I cooked them until very soft and then mashed them with a fork. Then, I heated oil and spices in a skillet and added the mashed lentils in a thin layer and let them cook until lightly browned on the bottom. I turned them over in batches, adding texture and more browned exteriors.

They didn't hold together well, unlike beans, which are more starchy. So, I added a little sour cream for texture and richness and a little Monterey jack cheese as the "glue" to hold the lentil mixture together.

This is a "Must Make Again" surprise success!