Hot Cross Buns are delightful little sweet buns filled with warm spices, dried fruit and candied orange peel then, coated with a sweet, sticky glaze. The traditional English buns are typically an Easter recipe but are a delicious Brunch Recipe for any day. 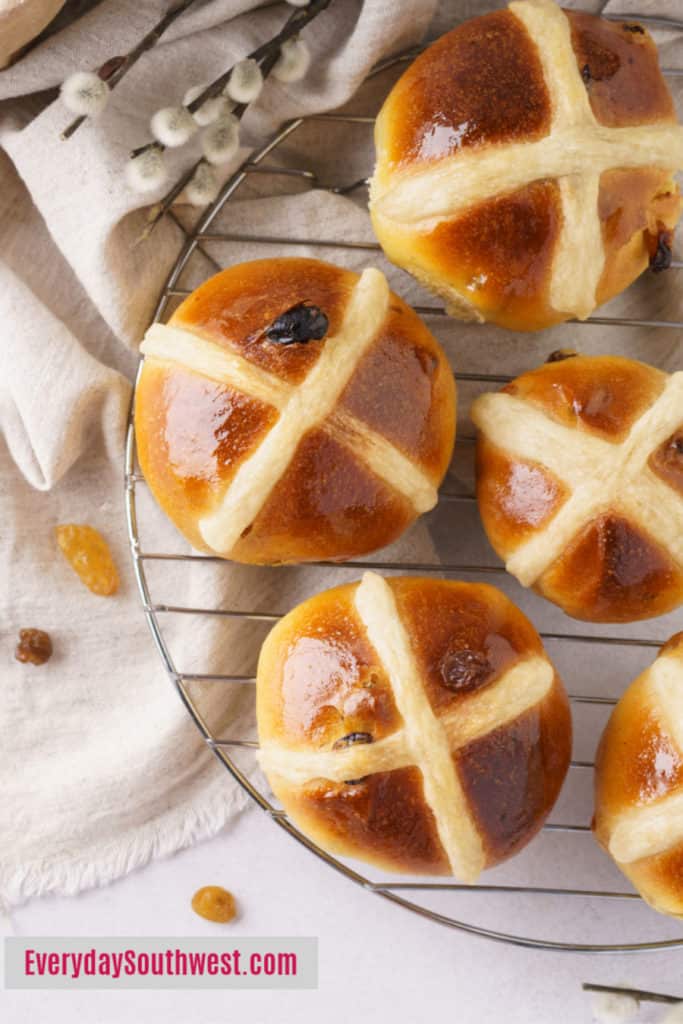 Don't you just love the smell of fresh bread warm from the oven? Me too.  Especially those little Easter buns with currents, candied orange zest and old fashioned spices with sticky butter on top.

I don't remember eating Hot Cross Buns when I was a little girl but, for some reason, the warm spicy flavor and yeasty aroma seem to call to me every springtime.  Dare I say that they are in my DNA?

Why are Hot Cross Buns Served at Easter?

Hot Cross Buns have a rich history and colorful traditions that tie the little buns to Easter, British history and The Reformation. They were a symbol of Catholic unity and were baked in defiance to the British Crown's attempt to outlaw Catholicism in favor of a state sponsored Church. Following the turbulent reins of Henry VIII and Queen Mary, Elizebeth I declared the buns legal to bake for funerals, Christmas and the Friday before Easter.

Their history is a definite bonus when Easter rolls around and I'm trying to decide what to bake for brunch.  But, until recently, I had no idea that Hot Cross Buns had anything to do with me.  After spending many years of insomnia filled nights pecking around on the computer and tracing my family roots, I have found a distant grandfather directly tied to Hot Cross Buns.  I know!  It's great!  A foodie like me with bread in my history... who would have guessed?

Hot Cross Buns were originally created by an Anglican Monk in the 12th century and became a symbol of solidarity during The Reformation. The sweet little buns were baked in defiance of Government's effort to outlaw Catholicism Apparently, the dangerous little buns became especially popular in Northern England during the Tudor era.  Fearing the symbolism of the cross cut into the bun in defiance to his laws would unify his opposition, the Hot Cross Buns were declared illegal by Henry VIII.

Later, the buns were made legal by his daughter Mary and illegal again  Easter and Christmas) by Elizabeth I.

Well... so was Granddad!  Granddad was declared a fugitive for teaching Catholicism by Henry VIII.  After finding himself on both sides of the law (just like the little buns) King James declared Granddad an outlaw and beheaded him right there on the public square—on the steps of the York Cathedral to be exact. York was the hot bed of the War of the Roses, Catholic uprisings and dangerous little buns.

Now, how's that for a foodie family history minute?  I've obviously never met Granddad (Bl. Thomas Welbourne) and I don't consider myself English but... I sure do love those Hot Cross Buns.  I've made loads of them the last few Easters and placed them in the freezer for later—for anytime I need a warm,  home-y feeling treat. 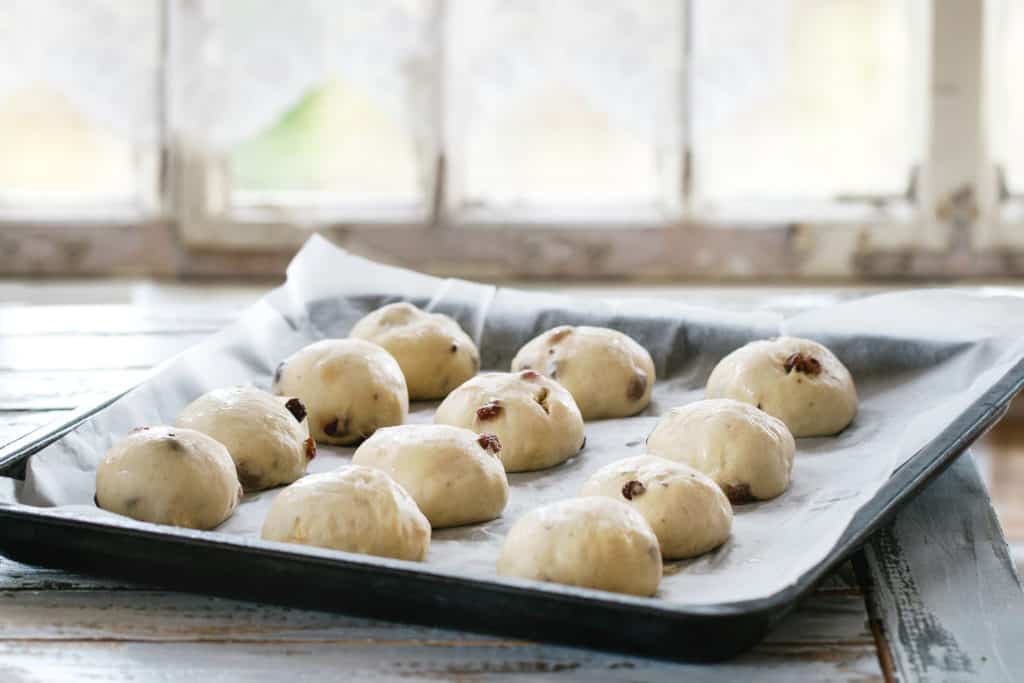 It's Good Friday today.   That means there is plenty of time to make Hot Cross Buns this weekend.  Don't worry, you don't have to be Catholic (I'm not) and you don't even have to celebrate Easter (I do) to love these little treats.

I like to make mine as traditional as possible so I bake the "cross" into the bun.   Piping icing on top after they are finished is a modern addition.  I also like to use the traditional English mixed spice.  It's a little difficult to find so I included a recipe for it.  The mix does include seven different spices so, if you don't have all of them in your cupboard, or you don't want to buy a spice that you don't use often,  please feel free to use the spices you do have.  If you do want to add a new spice to your cabinet, consider buying mace.  You can often find it in small bottles.  I think it gives the most "English" taste of the spices.  Don't worry about not being able to use it again, mace is wonderful in sweet bread and cookies, especially holiday breads.

This post was updated from the original posted on April 5, 2012 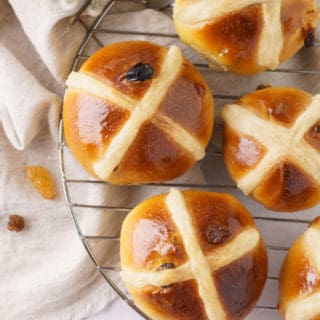 Sandy
These little buns with dried currents and English mixed spice are a family favorite at Springtime and Easter.
5 from 8 votes
Print Recipe Pin Recipe

Here is the original Hot Cross Bun photo from my early blogging adventures. I had a lot to learn about food photography but, as you can see, these baked sweet buns have been a family favorite for a very long time.

I hope you like this recipe.  Give it a try and let me know what you think.

Hot Cross Buns with White Chocolate, Dates and Pistachios by Chocolate and Zuccchini