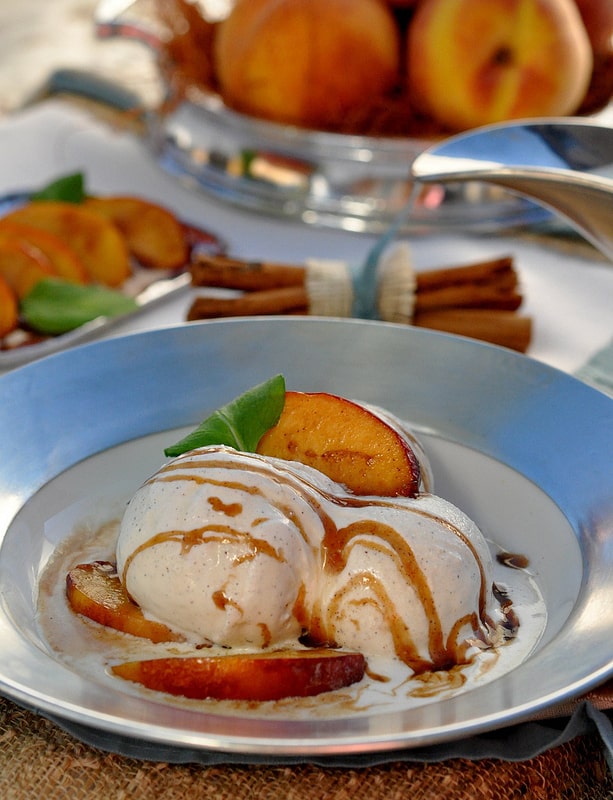 Peaches and buttermilk hold a special place for me. The place where childhood and family and hot summer days roll into one. They are the first dish I ever made all by myself; just for Grandma and me.

As kids, we stayed a week with Great-Grandma every summer. The two hour drive to her house seemed like forever with four kids squished in the backseat of our car. She lived in a white house out on the main highway leading into her small town in eastern Arizona. We could spot its picket fence and tin roof from the top of the big hill. Grandma was always waiting for us as we pulled into her driveway and parked behind her funny red and white car with big fins on the back. She stood on the front porch wearing a blue dress with tiny flowers, one hand on the trellis and one hand shielding her eyes from the Arizona sun, until we pushed each other out of the car and ran up the steps for a big hug.

The tiny, two bedroom house could hardly hold four rowdy kids so we rushed through it on our way outside; through the living room to the kitchen, whose floor ran downhill until it reached the end of the screened porch.  We slowed down a little on the porch as we passed the shelves stacked with shiny jars filled with fruit and vegetables that stretched up to reach the ceiling and were halfway across her backyard before we heard the wooden screen door slam.
Grandma's backyard. We spent most of our week with Grandma in her big backyard, picking up pecans that fell from her trees and raking leaves into giant piles to jump into, climbing the honeysuckle covered fence to taunt the bull in the neighbor's pasture.

Grandma called us in from the heat every afternoon for a cold bowl of "peaches and milk" she made with the peaches from her backyard. She sliced the peaches into a small bowl and sprinkled them with sugar. As soon as the peaches gave off a little juice, she poured in just enough cold milk to cover them. I carried my bowl into the living room where I climbed onto her lap and ate them while she read me a story. I don't remember how old I was, but I remember I was not old enough to read. Hearing Grandma read a story was a special treat.

One day, I decided to make peaches and milk for Grandma. I made them exactly the way I had seen her do it many times before. When they were finished, I carried my masterpiece into the living room to present to her.

I waited anxiously to see her reaction. Had I forgotten anything? I retraced the steps in my mind. Then, she smiled. She said they were delicious. She said something nice about every bite.
I skipped back to the kitchen; proud of the empty bowl in my hands.

Donna was in the kitchen when I got there. She was old enough to read. As I filled the sink with soapy water, Donna pointed out the carton of milk I had used to make Grandma's snack. She said it was buttermilk. I had never even heard of buttermilk, but there it was and it was on the peaches Grandma had eaten.

"Peaches and Buttermilk" is my favorite childhood story. Not because it was the first thing I ever made or because "peaches and milk" is the most original dish in the world. It's my favorite story because it tells me so much about my Grandmother. It tells me how kind and gracious a woman she was and how much she loved me.

Here's my Peaches Foster with Vanilla Bean Buttermilk Ice Cream Recipe, my "grown-up" version of "peaches and milk." The warm peaches are perfect for anytime of the year.

Directions:
Scoop ice cream into serving bowls and set aside (or in the refrigerator) while preparing the peaches.
Stir the butter, sugar and cinnamon together in a shallow saute pan or frying pan over low heat. Continue stirring until the sugar is dissolved.
Add the peach slices to the butter and sugar mixture. Cook until the peaches soften a little.
Remove the pan from the heat and carefully add the rum. Return the pan to the heat and cook to warm the rum. If you have a gas stove, tip the pan to ignite the rum. If using an electric stove, use a long match or fire starter to ignite the rum.
When the flame die out, spoon the peaches over the scoops of ice cream and top with some of the pan sauce.
Serve while warm.

Directions:
To make the ice cream: Combine the cream and sugar together in a small sauce pan over medium heat.
Cut the vanilla bean in half lengthwise and scrape the seeds out with the back of a knife. Add the seeds and the bean to the cream and sugar mixture. Bring the mixture to a simmer and stir until the sugar is dissolved. Remove from the heat and cool completely. When the mixture is cool, remove the vanilla bean and pour into a large bowl. Add the buttermilk and vanilla extract. Refrigerate the mixture until well chilled, at least one hour.
Pour the mixture into an ice cream maker and churn according to the manufacturer's directions. Scoop the ice cream into a freezer safe container and freeze for several hours or until set.