Home » Fried Avocado with Spicy Shrimp Salad Recipe—Paula Deen, This One’s for You!

I cannot tell a lie, I did it. I took an avocado, coated it in breadcrumbs and deep fried it. Then, I covered it with a spicy shrimp salad recipe and ate it for lunch.
Why? By now, I’m sure you’ve heard about the Anthony Bourdain, Paula Deen smack down.
You haven’t?
Well… let me tell you about it! For some reason, Anthony Bourdain, host of No Reservations, decided to pick a fight with mothers everywhere by calling Paula Deen, Queen of Southern Homecooking herself, the biggest threat to America, today. Paula responded with a well placed uppercut saying that she and her Food Network friends cook for people who can’t afford $59.00 for prime rib or $400.00 for a bottle of wine.
Let the food fight begin!
I don’t know why I feel so defensive about Paula Deen. I’ve never actually cooked one of her recipes… yet. But, I know those flavors. Like so many of my generation, I grew up on American Regional Cuisine; complete with mayonnaise and tuna noodle casseroles made with condensed Cream of Mushroom Soup. Come back here, Northeast. Ya, we’re talking to you, with your heavy roux chowders and your mayonnaise covered lobster rolls.
Bourdain has made a habit of taking cheap shots at Emeryl and Rachael Ray. So, why the fuss now? Perhaps his jab hit a little too close to home, our home—a little too close to Mom and apple pie.
His point that foods such as Deen’s are seen as unhealthy is nothing new. Funny, I never had to watch my weight back then; not until my kids were grown and I could afford to eat in fancy restaurants such as the ones Bourdain has cooked in. Hmmm… I wonder?
Anyway, I found out that Paula Deen likes fried avocado. Well… who doesn’t? Antonia fried them for her during a quick-fire challenge on Top Chef All-Stars. I was stunned. I actually called out to the television,
“Hey! That’s my recipe!”
Well, not mine exactly, I stole it from my favorite Cowboy restaurant, The Roaring Fork in Scottsdale, which was conceived by one of my favorite chefs, James Beard Award winner Robert McGrath. The Roaring Fork uses a crab salad instead of the fried shrimp that Antonia used. I substituted little salad shrimp for the crab in this recipe, as well. Let’s just say I had to pick my jaw up off the floor when I saw the price of fresh lump crab. It’s a substitution that Paula would approve of.

Directions:
In a small bowl, mix mayonnaise, lime juice, minced chipotle or hot sauce and chives. Set aside 2 to 3 tablespoons dressing to use when plating the avocados. Stir the remaining dressing into the shrimp a little at a time to reach the desired consistency, season with salt and pepper to taste. Cover with plastic wrap and place in the refrigerator.

Heat oil in a deep frier, or deep pot on top of the stove, to 350 degrees. Make sure there is enough oil to submerge the avocados and enough extra space in the pot so that the avocados don’t cause the hot oil to boil over.
Place flour and bread crumbs into separate shallow dishes or plates. Season with salt and pepper. Beat together the eggs and milk to make an egg wash and place in a shallow bowl.
Cut avocados in half and remove the seeds. Cut halves into quarters. Remove the peel.
Dust the avocado quarters evenly with flour. Tap off the excess. Dip into the egg and milk mixture. Coat with panko crumbs.
Place breaded avocados in a frier basket or on a spider to lower into the oil. Fry until golden brown, about 3 to 4 minutes. Remove from frier and drain on a paper towel.

Here are some other avocado dishes you might like:
Strawberry Mango Salsa by Two Peas and Their Pod
Chicken, Avocado and Caramelized Onion Quesadillas by Taste and Tell
The Perfect Shrimp Recipe by Average Betty
5 Fresh and Simple Avocado Salads at Foodie Crush 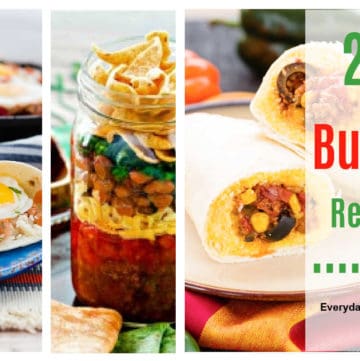