I've found it.  Enchilada Heaven.  It's been right under my nose and  I never even suspected it.  Blanco Tacos + Tequila on Scottsdale Rd. puts a modern spin on traditional Mexican and Southwestern food. 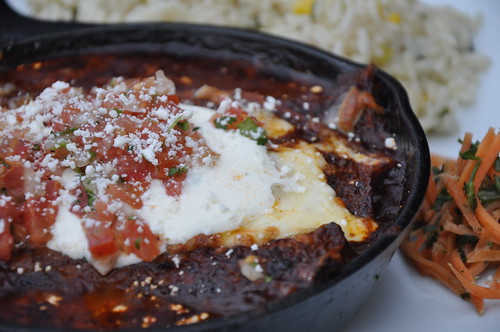 I drove by Blanco the other day.  The bright blue umbrellas over the patio tables caught my eye.  They look so fun, like they're saying, "Hey! The beach is right over here!"  I found myself wishing I had time to stop.  Not today though,  too busy as usual.  Secretly, I was glad for the excuse to keep going.  Blanco is one of my favorite Tucson restaurants and to tell you the truth, I have been afraid to try the Blanco Tacos + Tequila that opened here in Scottsdale. What if it isn't as good as the one in Tucson?  Can't live up to expectations?  So, I just on drive by.

Yesterday, after an incredibly long and hectic couple of months, I decided I had to get away.  You know, like that Pina Colada song.  So, I called my husband and told  him to meet me at Blanco to "plan our escape."  He was even more reluctant to try Blanco than I was, but for different reasons.  He's not a fan of "modern" Mexican food. He's an old school, Mexican food lover.  You know, the "brown, hot and plenty of it" kind that's not really authentic Mexican at all, it's more of a Southwestern border invention.  Pleasing both of us could be impossible. 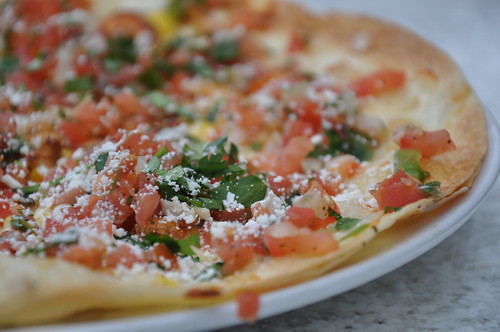 We started with a Chipotle Shrimp and Corn Cheese Crisp.  Yes, the traditional Southwest dish is a "cheese crisp." They have been lightened up over the years.  They're not nearly as greasy as the fried, crispy, open faced, covered in melted cheese, plate sized perfection that they used to be.  But hey, they are still the best appetizer on the planet.  My husband doesn't think this lightened up version is real Mexican food.  What's not Mexican about camarones (shrimp), corn or tortillas?  It even has cotija cheese!  The blend of Mexican cheeses didn't need to be quite as thin tho', a little more would be nice. 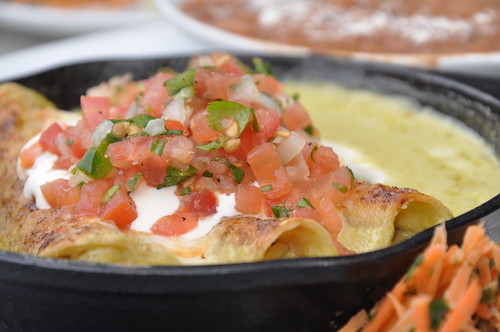 Then came the enchiladas.  It was cold outside (well, cold for Scottsdale) so I ordered the enchiladas.  Besides, I didn't want to be too disappointed if the shrimp tacos  weren't as good as tacos in Tucson.  The Green Chile Pork Enchiladas with Tomatillo Cream Sauce came to the table in individual cast iron skillets.  They were bubbling hot  with a dollop of chilled sour cream and lots of fresh pico de gallo.  The pork filling was moist and tender while the sauce was both creamy and tart from the tomatillos.  Did you see the crispy tops of the corn tortillas?  Delicious.  Blanco has a wood burning oven that cooks them perfectly.

My husband ordered the Traditional Cheese Enchilada with Ancho Cream Sauce ( I know, I just had to show this picture again).  They were beautiful.  I was a little jealous of the rich smokey flavor of the ancho chile (my favorite chile).  But mine were too good to trade.  So, I just ate part of his.  He's used to it by now.  The small amount of cream gave the enchiladas a modern twist and added to the rich mouth feel that you don't usually get with enchilada sauce. 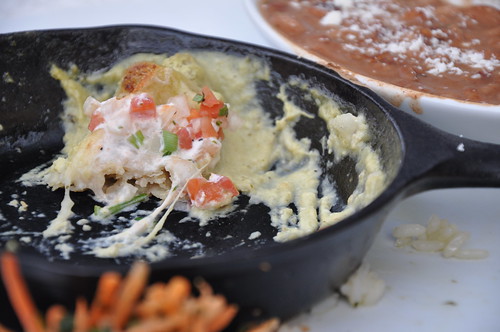 Good to the last bite

Here are some recipes for enchiladas if you'd like to make them at home.  Try adding a little cream to the sauce and see what you think.