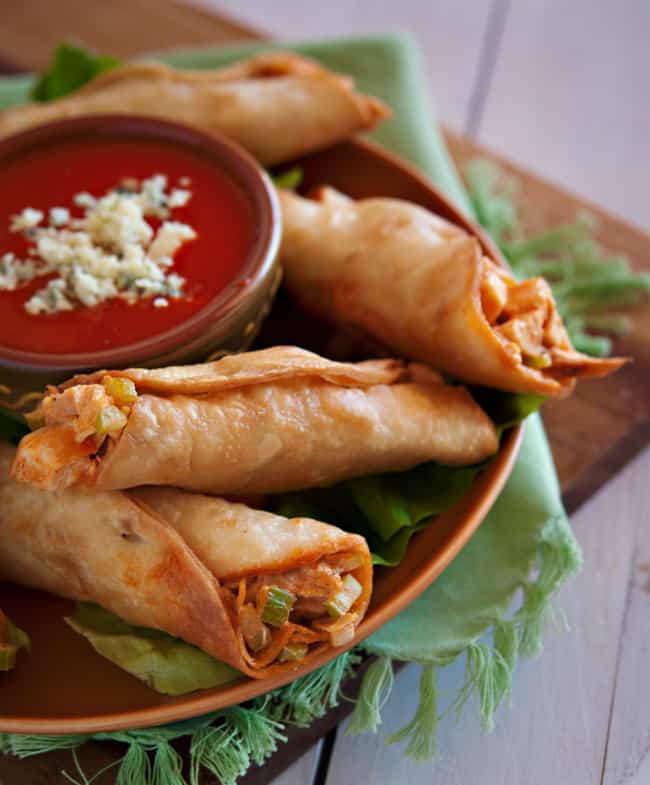 Stop!  Don't touch that back button!  A chicken cannoli is not as crazy as it sounds.  It's a make ahead, Southwest version of Buffalo chicken wings that frees me up to enjoy the football game and not miss all the fun.

My name is Sandy and I love football.  There.  I said it.  I know it's not the trendy thing to say, or the girlie thing to say, but I can't keep it a secret any longer.  Some people may blame my childhood; growing up between two brothers, playing touch football in the street, listening to my parents bet lobster dinners on playoff games and negotiate the point spread for the best advantage.  Others may blame the fact that I have lived most of my life in a house with a sports loving husband and two athletic sons.  What's the word for it? Stockholm Syndrome?

What ever the reason, on Super Bowl Sunday, you will find me right there in the middle of things, cheering, arguing calls from the referees and yelling, "Rip their filthy ears off..."  Never mind.

Needless to say, the Super Bowl is a pretty big deal at my house.  I love to have a big selection of appetizers made ahead and ready to go so that I don't miss a minute of the action.  First, I clear the sofa table and remove all knickknacks, tchotchkes and other feminine breakables to a safer location making room for the parade of chips, dips, popcorn and even a puff pastry delight or two.  Mind you, the puff pastry must be filled with hearty meats like pastrami or be sidelined until Valentine's Day , Oscar night or some such girlie holiday.  No brie or sushi allowed.

This year, "the boys" are asking for Buffalo wings.  Yes, Buffalo wings.  While I am coming out of the closet about football, I must also disclose my dislike of Buffalo wings.  Forget the fact that you have to fry them at game time and miss all the pre-grame chatter, they're sticky and messy and full of veins and so little meat that people suck on the bones and... never mind.

My solution?  I decided to deconstruct what they love about Buffalo wings and put them back together my way.  The game plan was to attack the  "spicy hot" element with a Buffalo chicken salad that can be made a head, freeing up time for puff pastry thingies.  The crunch of the hot wings was a little trickier.  I had to bring out the secret weapon of all Sonoran Southwest cooks, the flour tortilla.  No one can resist spicy chicken wrapped up in a crispy flour tortilla.  I cut the flour tortillas into circles and shaped them around a cannoli ring to fry until crispy the day before.  Then, stuffed them with my Spicy Buffalo Chicken Salad Recipe before everyone arrived for dinner.  What?  Cannoli are manly... remember the Godfather?

Tips for how to make a Buffalo Chicken Cannoli:

Print
Prep time
40 mins
Cook time
20 mins
Total time
1 hour
Spicy chicken and crunchy flour tortillas were made for each other. Make these cannoli shaped tortilla shells ahead and fill them with cool, refreshing Buffalo Chicken Salad for a crowd pleasing appetizer.
Author: Sandy Hoopes
Recipe type: Appetizer
Cuisine: Southwest
Serves: 6
Ingredients
Instructions
Wordpress Recipe Plugin by EasyRecipe
3.2.1215
My family loved the twist on one of their game time favorites.  I served them for dinner a couple of days ago to make sure my plan would work and plan to serve them again on game day.

Keep in touch and let us know how your game day went.  Are you a fan?  Are you going shopping to avoid the chaos?  What is your favorite Super Bowl food?  We love talking to you on Twitter and  Facebook  or sign up for our email updates.  We love hearing from you!