I'd like to say that this Pollo Asado Pizza Recipe is our favorite tailgating recipe. Well, it would be anyway... if we tailgated that is. Alas, no tailgating for me. I do have to say that I feel a little left out when all the tailgating posts go up around the internet and competition cooking shows pit Bears against Packers in parking lot throw downs. Inspired, I start planning my winning recipes—recipes that will wow the crowds and have everyone standing around my grill waiting for a bite. Maybe this year will be the year. So, with shopping list in hand, I step outside and... WHAM! Slapped back into reality.

I mean really, have you ever tailgated at an Arizona football game? It was 109° out there yesterday! With the radiant heat that so lovingly blesses us each and every September. In fact, the last time I attempted to tailgate, I was covering the Cardinals vs Seahawks game for my newspaper. Ya, there were tailgaters out there, in the parking lot, on the asphalt, at noon! Most of them were the hardcore Seahawk fans that followed their team here from Seattle. Poor souls. As an interesting angle for my story, I had brought my oven thermometer with me and set it on the ground while I interviewed the fans. It read 136°  baby, that's right; the perfect temperature to roast my legs to medium rare.

Now, I do realize that some of you are able to tailgate. In fact, I've heard a rumor about something called "Fall" although, I've never actually seen it (my students used to think it was a myth invented by "the Man" in order to get children excited about school and bring apples to their teachers... but, that's a whole OTHER story). And, just to prove that I'm not jealous, or harbor any grudges anyway, I'm sharing my Pollo Asado Pizza Recipe with you. It's for the days that your team is out of town and you have to watch them on tv, or for when it's too cold to go outside (I've heard rumors about that, too). 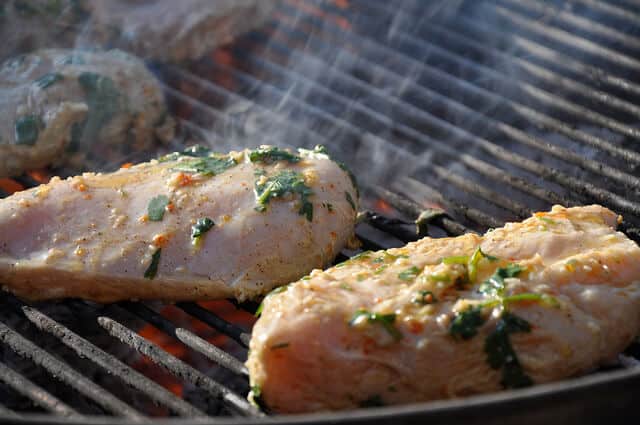 I use the same Pollo Asado Recipe that I used for the Pollo Asado Tacos. The chicken is a little spicy so, the packaged Hot Roll Mix works really well as the dough' it has a slight sweetness.

In a mortar and pestle or bowl, mash together the garlic, jalapeno, cilantro, salt and pepper to make a paste. Put the paste in a glass jar or plastic container. Add the lime juice, orange juice, vinegar and olive oil. Shake it up really well to combine.

Place the chicken in a large baking dish and pour the marinade over it. Wrap tightly in plastic wrap and refrigerate for 1 hour or up to 8 hours, so the flavors can sink into the meat. Don’t marinate the chicken for more than 8 hours though or the fibers will break down too much and the meat gets mushy.

Preheat an outdoor grill or a ridged grill pan over medium-high flame (you can also use a broiler). Brush the grates with a little oil to prevent the meat from sticking. Pull the chicken out of the marinade and season the it on both sides with salt and pepper. Grill (or broil) the chicken for 7 to 10 minutes per side, turning once, until cooked through; no pinkness. Remove the chicken to a cutting board and let it rest for 5 minutes to allow the juices to settle. Dice the chicken.

Do not make the pesto too far in advance, it will turn a brownish color. Combine the cilantro, garlic and pine nuts in a food processor and pulse until coarsely chopped. Add ½ cup of the oil and process until fully incorporated and smooth. Season with salt and pepper.

Add all the remaining oil and pulse until smooth. Transfer the pesto to a large serving bowl and mix in the cheese.

Divide the dough into two equal portions and form into two balls. Pat oil on the top of the dough, cover with plastic wrap and allow to rise.
Punch down the dough and roll out with a rolling pin into two 9 inch circles.
Place dough on a greased cookie sheet.

Assemble the Pizzas
Brush dough with melted butter.
Drizzled pesto over the dough.
Dice the chicken and spread evenly between both pizzas.
Cut the chiles in half and remove the stem and seeds. Cut into thin strips. Spread the chiles and sliced onions over the pizzas.
Top the pizzas with grated Monterey Jack cheese.
Season with salt and pepper.
Bake until dough is cooked through and the crust is golden brown.
Garnish with minced cilantro and diced tomato.