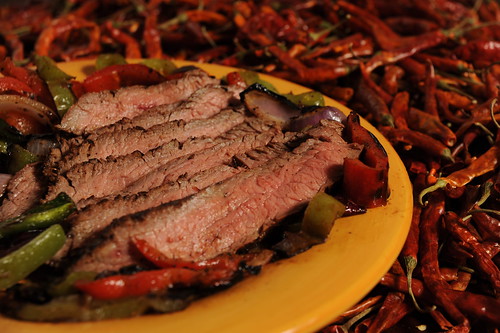 Sandy and I went to Santa Fe and took some classes at the Santa Fe School of Cooking - it was an incredible culinary experience - I highly, highly recommend it for a fabulous getaway for any foodie interested in southwest foods.  I learned so much in just a few days - but I heard one thing that shocked and puzzled me. I attended a class called "Fajitas!," with Chef Susan Anzalone. She said this -

"Never add acid to marinades for meats. NEVER. It will toughen the meat, just like it does in ceviche. Use zest if you want citrus flavor."

Huh. (==scratches head==) This stunned me, because for years I have used lime juice in fajita marinades - with chicken and flank steak. So, I did some research seeing what some of my favorite chefs recommend for fajita marinades.

Alton Brown, a culinary hero of mine, calls flank steak "the most marinatable hunk of beef there is" in his book I'm Just Here for the Food. But, he does NOT use citrus in his marinade. On Good Eats, he does use lime juice, but says it does NOT tenderize the meat but only adds flavor. ((( Hhmmmm . . . OK, A.B., one question:  if you're not using juice for tenderizing meat but only flavor, why not use ZEST - it's 1,000 times more flavorful than juice?! )))

Some of my favorite magazines - Bon Appetit, Gourmet and Cooking Light - all use lime juice in their marinades, all recommend varying times for marinating.

And the amazing source America's Test Kitchen (Cook's Illustrated February 2007) uses lime juice, but sprinkles it on right before cooking. So, obviously ATK does not recommend citrus as a marinade.

Now that grilling season is here, I plan on doing more than my share of feasting on fajitas - but I was confused: how to marinate?

I decided that the only solution in the quest for a perfect fajita marinade was  a true "Donna's Test Kitchen" test: JUICE vs. ZEST. The two marinades I used were identical except one used zest and one used juice.

I marinated two hunks of flank steak  for one hour on the countertop. 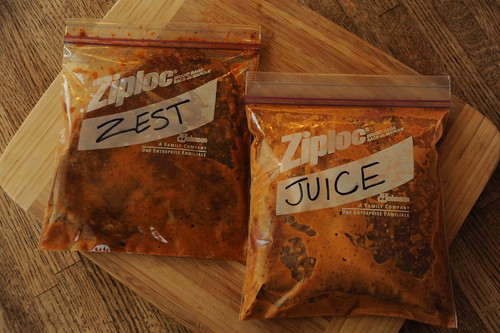 I then sprinkled a little lime juice on both hunks of meat and then cooked the two hunks side by side on the grill with the veggies - same temperature, same length of time. 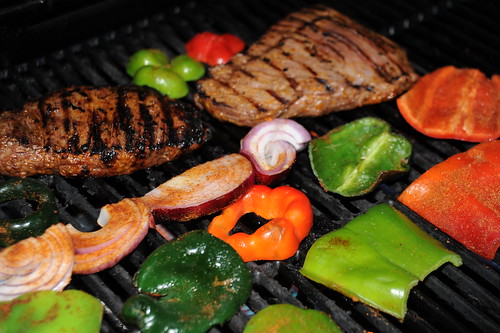 I took off the meat, let it rest about 10 minutes and sliced it. 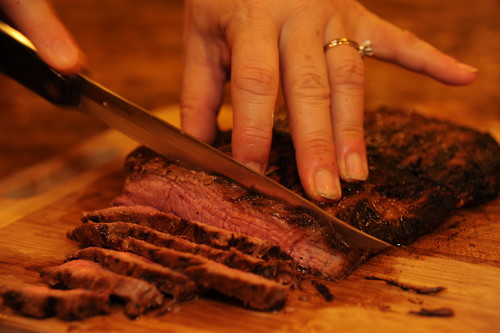 There you have it, southwest food fans! Use ZEST in your next fajita marinade!

NOTE: I MARINATED CHICKEN BREASTS WITH THE SAME ZEST MARINADE, WITH GREAT RESULTS - JUST AS DELICIOUS AND TENDER AS THE FLANK STEAK!